On Sunday morning, Jojo and took one of our bike loops to Lake Monroe, and it was the single biggest bird day I’ve ever had. By late May most of our migraters are back and nesting. We stopped for a moment on the trail that overlooks Jackson Creek, and watched while a pair of Mallard ducks waddled into the water and started floating down stream.

Once back on the road, and close to the lake, the birds started showing themselves. First a bluebird flew right in front of me, then we saw some goldfinches. Riding through the woods I heard the unmistakable sound of a red-breasted grosbeak (chick-burr) and then a vireo in the upper story of the trees. I often hear woodpeckers, in town we have flickers, red bellies, and downy woodpeckers at our feeder, but in the woods we get lucky and see the large pileated woodpecker. 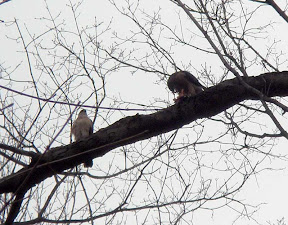 So early the next day, I was outside our house moving the recycle bins, and to my surprise, a Cooper’s Hawk swooped over my head and landed in a low branch. The birds in the surrounding trees were twittering up a storm, and I could see why, the hawk had an adult starling in its claws, and was just waiting around to see if he was going to be hassled. He then flew to another tree, and from there I suppose to Dunn’s Woods, were I know a pair is nesting. (I am not being grammatically sexist, the males are noticeably smaller that that females.)

My other amazing encounters this month were a great blue heron flying up from one of the ponds in Miller-Showers park, a catbird in our neighborhood, a cedar waxwing near the Von Lee, and a broad winged hawk over the Hoosier Forest.